National Forum (राष्ट्र मंच) has demanded that ,”PM Shri Narendra Modi must announce restoration of Full Statehood to Jammu and Kashmir in his Independence Day speech.”

A press statement issued by the National Forum says :

The statement further says , Rashtra Manch is seriously concerned over the situation following the questionable actions of the Union Government on 5 August 2019. Two years have passed since the Union Government annulled Article 370 of the Constitution, which provided a special status to the state of Jammu and Kashmir, and Article 35A, which protected the rights and privileges of its “permanent residents” as defined by the State Legislature. Simultaneously, the State itself was bifurcated into two parts, both of which — Jammu and Kashmir, and Ladakh — were downgraded into two Union Territories.

According to the statement , these actions, and the utterly undemocratic manner in which they were taken, have caused a deep sense of hurt, humiliation and betrayal in the minds of the people of Jammu and Kashmir. The Modi Government took these decisions without any consultation with the people, who are the principal stakeholders in a democracy, and with their elected representatives. It also denied them basic constitutional rights for a prolonged period of time. All the leaders of political parties in Kashmir, who have repeatedly pledged their allegiance to the India, were detained for a prolonged period as if they are anti-national and a threat to public safety. Even today people and their representatives are unable to exercise their basic rights of holding meetings or expressing their views freely. We deem this situation to be unacceptable in a free and democratic India.

The statement emphasises , furthermore, far from fulfilling the promise of attracting new investments and accelerating development, the Modi Government’s actions have caused losses worth tens of thousands of crores to the economy of Jammu and Kashmir. Lakhs of youth have lost employment and there has been a worrisome increase in suicides among young people.

The statement says ,the people of the rest of India — especially, leaders of the non-BJP political parties — cannot sit quiet when our sisters and brothers in Jammu and Kashmir, which is an integral and inseparable part of India, are in pain. Therefore, in exercise of our patriotic and democratic duty towards them, we demand:

1: The Prime Minister should announce in his speech on Independence Day that —

2: The constitutional validity of the repeal of Article 370 is currently before the Supreme Court. The apex court should expedite hearing on it and give its verdict soon. Its verdict should be binding on all concerned.

3: Separatism, terrorism and communal politics are common enemies, which must be fought unitedly.

4: Jammu and Kashmir is a border state. It directly bears the brunt of any deterioration in India’s relations with two large neighbours – Pakistan and China. The ongoing developments in Afghanistan are also a matter of grave concern, since these could have a negative effect on peace in Jammu and Kashmir. Therefore, the Government of India must act with extreme care and alacrity so as to prevent anti-India forces from exploiting the situation of ‘Dil ki Doori’ and ‘Dilli ki Doori’.

in the end the statement calls upon the non BJP leaders to so solidarity with the kashmiri people . “We appeal to the leaders of all non-BJP parties to show solidarity with the legitimate democratic demands and aspirations of the people of Jammu and Kashmir both in and outside Parliament.” 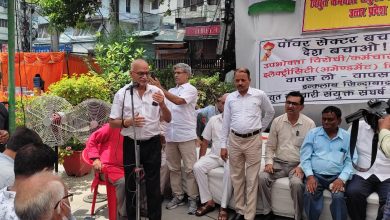