​As Covid consumes human life in a very conspicuous way we are confronted with additional problem of disposing off human corpses. Cremation grounds are lit with continuous pyres, graveyards are running out of land and now Ganga has become a mass grave potentially polluting its water.

​In India, one estimate reveals that funeral pyres consume 6 crores trees annually and plays a huge role in deforestation in country. Air pollution and deforestation are not the only environmental threats caused by cremation. They also generate large quantities of ash – around 50 lakh tonnes – which are later thrown into rivers, adding to the toxicity of their waters. Hence the ash was already polluting the water of Ganga before we became alarmed by the scenes of floating human corpses.

Prolonged burning of fossil fuels for cremation results in around 80 lakh tonnes of Carbon Dioxide or Green House Gas emissions per year according to one estimate. It creates different hazardous gases, including dental mercury, which is vaporized and released into the environment leading to health hazards in the surrounding area. Many of these toxins can bioaccumulate in humans, including mercury (often from dental amalgams, but also from general bioaccumulation in the body). Cremation results in various other toxic emissions including persistent pollutants such as Volatile Organic Compounds, Particulate Matter, Sulfur Dioxide, Nitrogen Oxides and heavy metals. A Indian Institute of Technology, Kanpur, 2016 study concludes that open air cremations contribute 4% of Carbon Monoxide emissions in Delhi.

There are concerns for crematory workers as well, who may be exposed to nuclear medicine treatments (chemotherapeutics/radiation), orthopaedic (implants) and pacemaker explosions, and nanoparticles.

In the Rig Veda, a hymn, traditionally recited by a priest or an adult male, urges Agni, the Vedic god of fire, to “carry this man to the world of those who have done good deeds.” From the perspective of Hindu, Jain, and Sikh rituals, the act of cremation is seen as a sacrifice, a final breaking of the ties between the body and the spirit so it may be free to reincarnate. Now it also differentiates Hindus from Muslims, Christians and Parsis. And even upper caste Hindus from lower class Hindus, who were generally buried. It was seen as right rather than rite. The lower castes often use the phrase ‘mitti’ for a human corpse, implying the dead body has already become earth even before the actual process happens.

In order to tackle the environmental problems stemming from these sites, the Indian government and environmental groups have, over the years, promoted the use of electric crematoriums as an alternative way of cremation. But these systems, which do not create pollution on site but are polluting where the electricity is being generated from thermal power plants which are still the biggest source of power for India, have by-and-large failed, mainly due to financial and religious reasons. They are expensive to run but, crucially, traditional rituals – such as kapal kriya, where a stick or long bamboo pole is used to crack open the burning skull to free soul from its earthly existence – are impossible.

Mokshda, a Delhi based Non Governmental Organisation working to reduce the environmental impact of funeral pyres, describes its creation of an alternate energy efficient “green cremation system” by maintaining that a body can burn completely in lesser time and with lesser wood than usual. Mokshda’s green cremation system consists of a human-sized grate beneath a roof and a chimney which reduces heat loss. Here the wood is placed on the metal slats, which enables better air circulation around the flames. It is also easier to transition from one cremation to another by removing the metal tray filled with ash and replacing it with a new tray containing the next body. One of the big advantages of this system is that mourners can continue to fulfill all traditional rites. It is believed that a traditional pyre takes about six hours and requires 500-600 kilograms of wood to burn a body completely, while this alternative system takes up to two hours and 150-200 kilograms of wood to burn a body and the emissions are reduced up to 60%, The organization has 50 such units spread around nine Indian states.

However Covid time has already altered a number of traditional practices. In some cases young women may be the only ones available to light the funerary pyre, which was previously not permissible.

Families in quarantine are forced to use WhatsApp and other video software to visually identify the body and recite digital funerary rites. In most cases of Covid deaths, crematorium workers, who are mostly Dalits, have been asked to read prayers traditionally reserved for Brahmin priests or people from a higher caste as the relatives and priests are afraid of going near the body.

Green burial is without using embalming fluids or toxic chemicals of any kind. The grave is often dug by hand. The body is simply placed in an unbleached cloth shroud rather than a casket. This allows the corpse to decompose naturally, returning its sustenance to the Earth. Many green burial grounds also act as wildlife refuges, creating safe spaces for animals and native plant life. Among the Gond community, one of India’s largest tribal group, burial, or Mitti Sanskar, was a common practice which, over the decades, gave way to cremation as the tribal community assimilated with the Hindu communities. However, the Gond community, has now decided to bury instead of cremating their dead, with an aim to reduce the number of trees cut for funeral pyres. It is believed in the community that through this ritual, the body mixes with five basic elements of nature: earth, air, water, fire and space. Also, Lingayats — ardent Shiva devotees and followers of the 12th century saint Basavanna — do not cremate their dead. Instead, the departed are buried in deep pits in a sitting, meditative position with a linga (symbol of Shiva) in the right hand.

In Tibet and other areas nearby, Buddhists practice a death ritual meant to encourage good karma. They take bodies to charnel grounds where vultures come to eat the flesh, offering back to the world what was taken in life: meat. It’s believed that the practice encourages the dead to move along to the next life without being held back by one’s greatest attachment—their physical body. Ritual aside, it’s a practical answer due to the scarcity of wood and usable burial grounds (the rocky earth makes it hard to dig).

Although a bit controversial but utilitarian alternative is human composting, the process of transforming bodies into soil, naturally.Farmers have practiced livestock composting for decades. Wood chips, moisture and breeze combine to expedite the natural process of decay into nutrient-rich soil. As soon as 30 days later, a dead cattle transformsinto (roughly) a cubic yard of soil.

​In the United States 6%  people prefer to donate their bodies after death to medical science institutions. In India too the percentage of people donating bodies or organs after death is very low.

​In Anandvan, set up by the late Baba Amte, everyone after death, irrespective of their religion, is buried with a sapling planted on top and no permanent or semi-permanent structure built. The problem of land for burial can be solved in Covid times by using the land alongside Railway tracks or highways. After some years the saplings will provide shade and possibly fruits.

By Abhay Jain and Sandeep Pandey 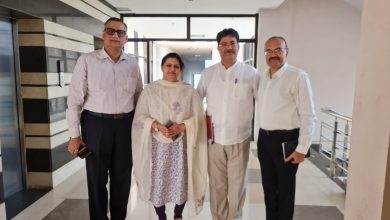